Here is the third part of the Pawanmuktasana Series 1 (Anti-Rheumatic sequence). These asanas concern hands, wrists and shoulders.
You can find the 1st and the 2nd part in my previous articles. The sequence has been developed by Swami Satyananda Sawaswati and is taken from the book Asana Pranayama Mudra Bandha.
Benefits of the following practise:
– The hand and wrist asanas are beneficial for arthritis of the related joints. They also relieve tension caused by prolonged writing and typing.
– The shoulder asanas relieve the strain of driving and office work, and are helpful in cervical spondylitis and frozen shoulder. They also maintain the shape of the shoulders and chest.
The practise can be easily performed at home or even at the office desk, and will take only about 15 minutes.

Base position remains the same: 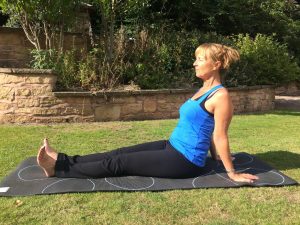 Sit with legs stretched, feet close together but not touching.
Place the palms of the hands on the floor to the sides, just behind the buttocks.
The back, neck and head straight. Straighten the elbows. Lean back slightly, taking the support of the arms. Close the eyes and relax. 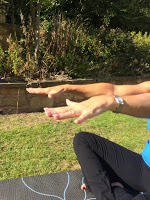 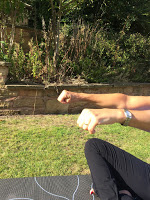 Sit in the base position or a cross-legged pose. Hold both arms straight in front of the body at shoulder level.

Open the hands, palms down, and stretch the fingers as wide apart as possible. Close the fingers to make a tight fist with the thumbs inside.

The fingers should be slowly wrapped around the thumbs. Again open the hands and stretch the fingers. Repeat 10 times.

Breathing: Inhale on opening the hands. Exhale on closing the hands.
Awareness: On the breath, mental counting, stretching sensation and movement. 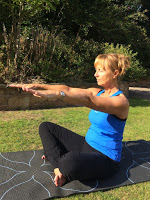 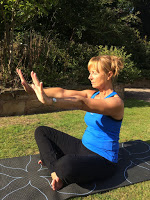 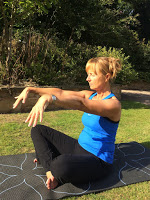 Remain in the base position or a cross-legged pose.

Stretch the arms in front of the body at shoulder level. Keep the palms open and fingers straight throughout the entire practice. Bend the hands backward from the wrists as if pressing the palms against a wall with the fingers pointing toward the ceiling.

Bend the hands forward from the wrists so that the fingers point toward the floor. Keep the elbows straight throughout the practice. Do not bend the knuckle joints or fingers.

Bend the hands up again for the next round. Repeat 10 times.

Awareness: On the breath, mental counting, movement in the wrist joint and stretching of the forearm muscles. 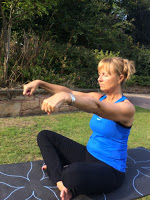 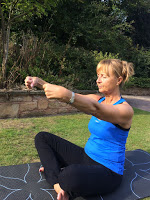 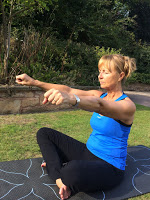 Remain in the base position or a comfortable cross-legged pose, but keep the back straight.

Stage 1: Extend the right arm forward at shoulder level. Make a fist with the right hand, with the thumb inside. The left hand may be used as a support if necessary. This is the starting position. Slowly rotate the first about the wrist, ensuring that the palm faces downward throughout the rotation. The arms and elbows should remain perfectly straight and still. Make as large circle as possible.

Practise 10 times clockwise and 10 times anti-clockwise. Repeat the same with the left fist.

Stage 2: Extend both arms in front of the body with the fists clenched. Keep the arms straight and at shoulder level. Rotate the fists together in the same direction. Practise 10 times in each direction.

Stage 3: Practise as in stage 2. Rotate the fists together in the opposite direction. Practise 10 times in each direction. 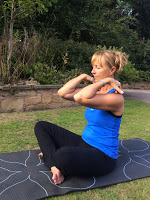 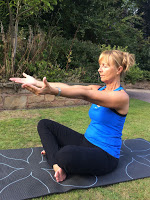 Stage 1: Remain in the base position or a cross-legged pose. Stretch the arms in front of the body at shoulder level. The hands should be open with the palms facing up.

Bend the arms at the elbows and touch the fingers to the shoulders. Straighten the arms again. This is 1 round. Repeat 10 times.

Awareness: On the breathing, the mental counting and the movement.

Practice note: Throughout both stages, the upper arms remain parallel to the floor, elbows at shoulder level. 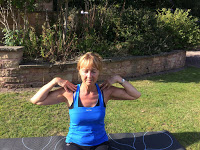 Stage 1: Remain in the base position or cross-legged pose. Place the fingers of the right hand on the right shoulder. Keep the left hand on the left knee and the back straight.

Rotate the right elbow in a large circle. Practise 10 times clockwise and 10 times anti-clockwise. Repeat with left elbow. Make sure that the head, trunk and spine remain straight and still.

Stage 2: Place the fingers of the left hand on the left shoulder and the fingers of the right hand on the right shoulder. Fully rotate both elbows at the same time in a large circle. Try to touch the elbows in front of the chest on the forward movement and touch the ears while moving up. Stretch the arms back in the backward movement and touch the sides of the trunk while coming down. Practise slowly 10 times clockwise and 10 time anti-clockwise.

Breathing: Inhale on the upward stroke. Exhale on the downward stroke.
Awareness: On the breath, mental counting and the stretching sensation around the shoulder joint.

I hope you enjoyed your practise.
In the next article we will describe the asanas for the neck.