“You may die, but you will never grow old if your spine stays flexible.” Yogi Bhajan (Kundalini Yoga Master)

People come to yoga and decide to stay with it for various reasons. As Mark Stephens states, Yoga is an unending process of self-discovery and self-transformation. Often towards becoming a “better yourself”. Even if it is only about a physical state.

Recognising that individual path in yoga is so very different, there are some common benefits that yoga can bring to the everybody’s health. In this abstract I would like to cover the benefits of practising yoga for the spine.

The spine is involved in every yoga asana, more than any other part of the skeleton. Many people are attracted to yoga initially to improve stability, mobility and overall functioning of spine [1].

Problems with spine are sometimes referred to as one of the “deseases” of the century. With the development of technology, people spend more and more time sitting in front of the computer screen, and this is the root of the problem with spine, which many now experience. Practicing yoga has multiple Benefits for the spine [3]:

Some Yoga asanas for the spine.

The movements between the individual bones of the vertebral column are very limited. There is more movement in the cervical and lumbar regions than elsewhere [2].

5 major movements that spine can make include [4]:

Practicing yoga allows to make all of these five movements.

Here are a few examples of the yoga asanas that help improve and maintain healthy movement, flexibility and strength of the spine [4]:

In my classes I often ask the clients to visualise each vertebrae of the spine while practising certain asanas. Here is a quick recap about the structure and functions of the spine.

The structure & functions of the spine.

The spine is a column of 33 vertebrae, that curves up from the coccyx to the base of the skull.  Its structure allows to fulfull the functions of support and motion. The column has a shape of “S”, which gives the spine firmness and flexibility. 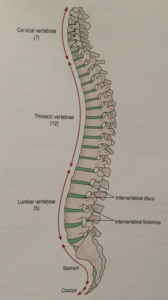 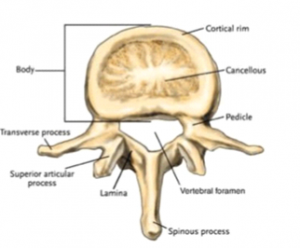 The bodies of the vertebrae increase greatly in size towards the base of the spine, as the lower spine has to support much more weight than the upper regions.

Curves of the vertebral column.

When viewed from the side, the vertebral column presents 4 curves: 2 primary and 2 secondary.

Figure 3. Development of the spinal curves [2].

The Functions of the vertebral column include:

The health of the spine is very important, since it has an effect on the health of other organs due to nerve endings or fascia that connect everything together.  The spine is at the centre of yoga, and practicing yoga has tremendous positive effects on the spine as well as the whole body.