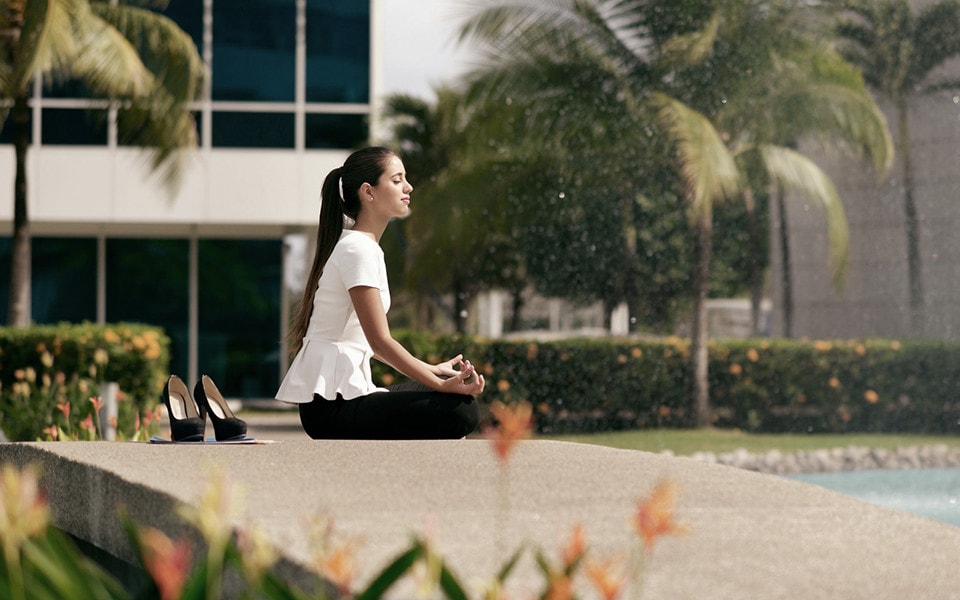 It is considered that the knowledge about chakras came to yogis in the deep meditation, and they described the chakras as the flowers of lotus. Even though the chakras are located in the subtle body, they influence the physical body. The Sanskrit word chakra translates to a “wheel” and means the energy centres within the body, that help to regulate all its processes, from organ function to the immune system and emotions.

There are multiple chakras in the body, however 7 of them, located along the central energetic channel, are specially connected with the person’s evolution. The chakras, located at the bottom part of the energetic chain, are connected to the basic condition of the mindset. Chakras, located in the higher parts of the chain, are responsible for a higher intellect, for the development of compassion and altruism.

Each chakra is a point which connects multiple nadis. Nadis are the subtle channels through which the prana flows. There are three most significant nadis: sushumna, pingala and ida. Suchumna is the central channel, which flows through the centre of the spinal cord, originating from mulandhara chakra and terminating at sahasrara. Ida nadi (moon channel) flows from the left side of mulandhara, while pingala nadi (sun channel) flows from the right side of mulandhara, mirroring ida. They run in the form of spiral and bring energy to the chakras. The functioning of chakras depends a lot on the condition of the nadis. The flow of ida and pingala is unconscious until controlled by yogic practices. 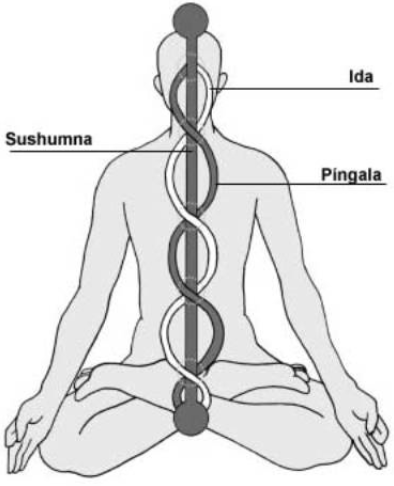 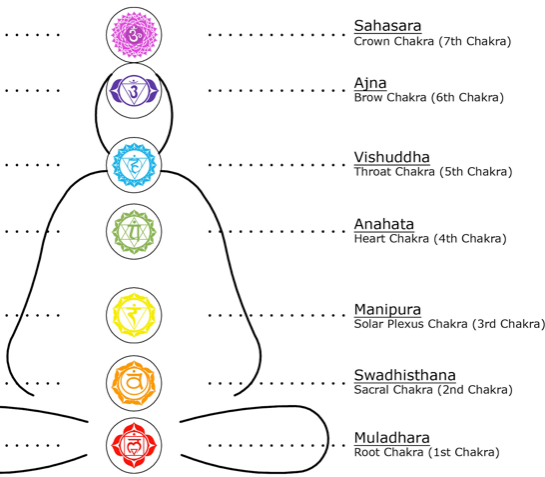 The seven major chakras are the base, the sacral, the solar plexus, the heart, the throat, the brow and the crown. Each of these centres contains all eight colours of the spectrum, but each radiates only one specific color. 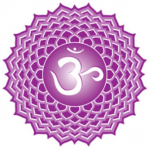 The crown chakra, or “sahasrara”, is situated just above the crown of the head. It is symbolized as a thousand-petalled lotus, representing infinity. Its dominant colour is violet, but the dominant colours of the other six major chakras are reflected here and unite with the violet to form the white light of divine consciousness. When kundalini awakens, it ascends through the chakras to sahasrara and merges into the source from whence it originated. 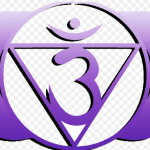 The brow chakra, or “ajna”, is situated at the centre of the brow between the two eyebrows. This chakra is often referred to as the third eye. It is depicted with two indigo lotus petals. These represent the ego self and the spiritual self; the rational and the intuitive mind. The dominant colour is indigo. Inside the two petals lies a circle containing a golden downward pointing triangle, above which sit a white crescent moon and golden sun. It is at this centre that the masculine and feminine aspects of our being merge, initiating a spiritual awakening. On the physical level, the brow chakra is related to the eyes, nose, ears and brain. The endocrine gland to which it is related is the pituitary gland. Instability in this centre leads to tiredness, irritability confusion and rigid thoughts. Imbalances can lead to sinus problems, stress, neuritis and migraine. When this chakra is awakened, the mind becomes steady and strong, the full control of prana is gained.

The throat chakra, or “vishuddhi”, is situated in the throat area, between the two clavicle bones. It is symbolized by a smoky blue lotus flower with sixteen petals. Its dominant colour is blue. The centre of the lotus is yellow and contains a white downward pointing triangle. At the centre of the triangle is a yellow circular band encompassing a white circle. This chakra is associated with the element of ether and the sense of hearing and communication. On the physical level, it governs the nervous system, the female reproductive organs, the vocal cords and the ears. The endocrine glands linked with it are the thyroid and the parathyroid. The throat chakra is the creative centre – especially of the spoken word. Here the dualities of life are accepted, allowing one to flow with life and let things happen as they will. Imbalance in this chakra can lead to asthma, vertigo, allergies, anaemia, fatigue, laryngitis, sore throats and menstrual problems. It can also cause a tendency towards skin and respiratory problems. 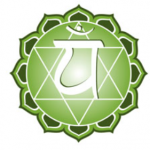 The heart chakra, or “anahata”, is situated between the fourth and the fifth thoracic vertebrae. It is symbolized by a green lotus with twelve petals, and its dominant colour is green. In the centre of the lotus is a smoky blue hexagram. It is associated with the element of air and the sense of touch. On the physical level, this centre is identified with the heart and circulatory system, the lungs and respiratory system, the immune system, and the arms and hands. This is the centre through which we love. When this chakra is out of balance, it can lead to heart attacks, stomach ulcers, an unhappy emotional life, fear, bitterness and resentment. If this level is purified, the feelings of universal fellowship and tolerance develop and everybody is accepted and loved for who they are. 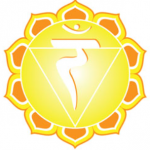 The solar plexus chakra, or “manipura”, is situated between the 12th thoracic vertebra and the first lumbar vertebra. This chakra is depicted as a bright yellow lotus with ten petals. At its centre is a downward pointing triangle, with a T-shaped projection on each of its three sides. Its dominant colour is yellow and it is associated with fire element. It is the centre of vitality because it is where prana and apana meet, generating the heat that is necessary to support life. On the emotional level, this centre is connected to desire. It is very active in people who are highly emotional, or who lack confidence. Manipura is the centre of self-assertion, dynamism and dominance and is associated with the ability to rule. On the physical level, it is concerned with digestion and absorption. When this chakra is not functioning well, a person may be subject to rapid mood swings, and may suffer from depression, introversion, lethargy and poor digestion. 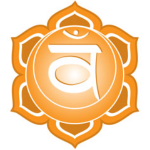 The sacral chakra, or “swadhisthana”, is situated halfway between the pubis and the navel. It is symbolized by an orange lotus and six petals. Its dominant colour is orange. Inside these petals lies a white crescent moon symbolic of female receptivity. The mood is associated with the water element and affects the flow of fluids in the body. This centre is connected with the emotions of fear and anxiety. The glands and organs which it influences are the skin, the reproductive organs, the kidneys, bladder, circulatory and lymphatic systems. On a deeper level, this chakra stores the individual and collective unconscious. It is the centre of humankind’s most primitive and deep-rooted instincts. By purifying this centre, the animal nature is transcended. 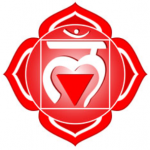 The base chakra, or “muladhara”, is sometimes referred to as the root centre because it is positioned at the base of the spine. It is symbolized by a deep red lotus flower with four petals. The lotus depicts spiritual unfolding. The dominant colour radiating from the muladhara is red. It is associated with earth, regulates the sense of smell, and is also the centre for physical energy and vitality. This chakra affects the legs, feet, bones, large intestine, spine and nervous system. When this centre functions to its full potential, a person is filled with strength and vitality and wants to live life to the full.

How can a varied yoga practice affect the Chakra system
Energy processes that happen in the subtle body have a reflection on the physical body: health, habits, positive and negative traits of character. Understanding processes, applied at the varied yoga practice, can help to collect more energy, save it, and direct this energy into the positive development.

The chakra, where a person’s attention is concentrated, focuses their mindset on this stage. This dominant energy would then define the person’s behaviour and motivation in life. The higher the mindset is focused, the broader is the perception of the person, and the more such qualities as altruism, compassion and love dominate their life.

Each chakra is associated with particular functions of the body and specific life issues and the way we handle them. Through some situations and our habits, for example, physical tension and limiting self-concepts, a chakra can become either excessive or deficient, and imbalanced. Individually developed sequence of yoga asanas and pranayama make a harmonising effect on each chakra. Due to this, energy freely raises upwards through the central channel. This contributes to the psychological, emotional and spiritual wellbeing.

Yoga seeks to balance out the energy of the chakras by purifying the lower energies and guiding them upwards. Practicing poses that correspond to each chakra can release the blocks and clear the path to higher consciousness.
Concentration on the chakras during yoga practice helps to stimulate the flow of energy and activates them. This in turn awakens corresponding areas of the brain as well as faculties in the physical and mental bodies, allowing one to experience planes of consciousness which are normally inaccessible. Yoga practise allows to purify and balance ida and pingala nadis, which in turn helps to allow the sushumna nadi to flow. When sushumna flows, the energy rises through chakras and helps to uplift human consciousness.